The extreme architectural versatility of wood is completed in the realization of a project with a Nordic flavor shaped on the sustainable philosophy of the client.

There is an obvious link between the structure and the arrangement of the elements: Wooden is an interior design project developed in tandem with the construction of a prefabricated house made of wood and located at the slopes of Brescia’s hills. 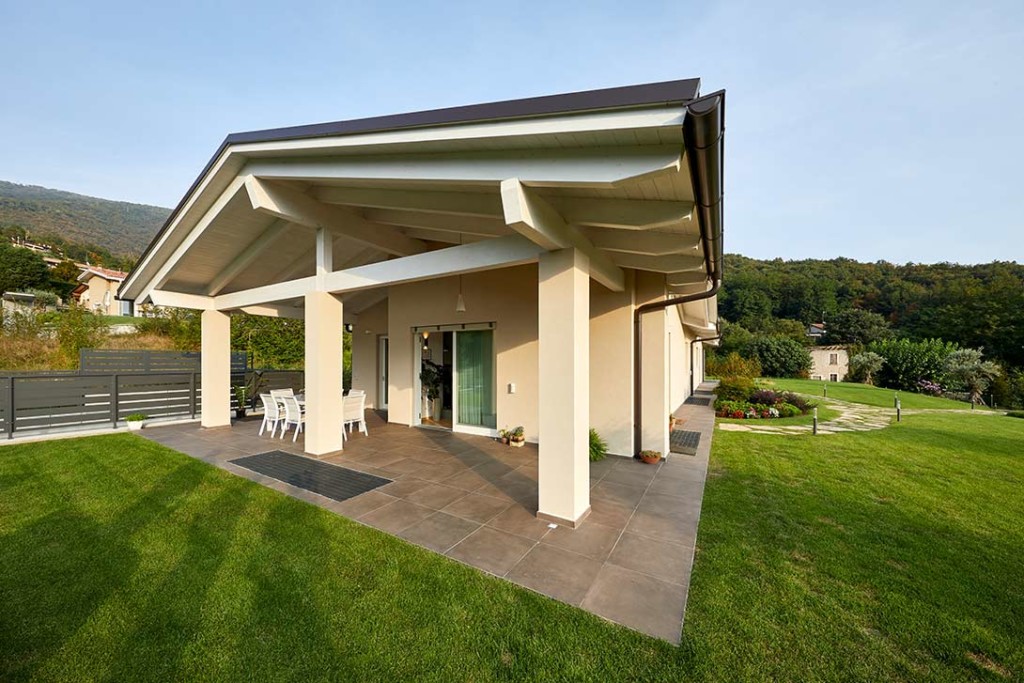 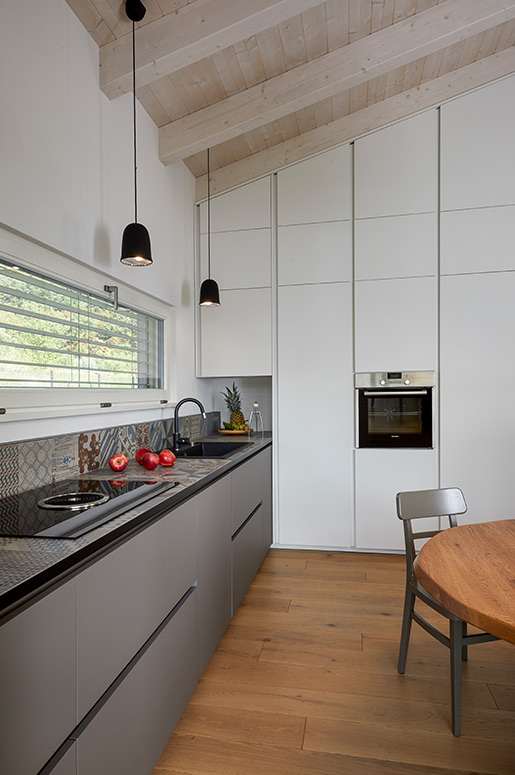 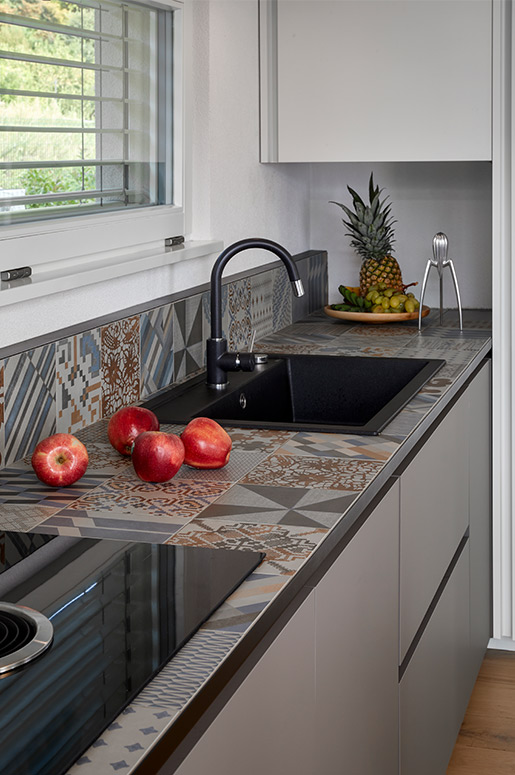 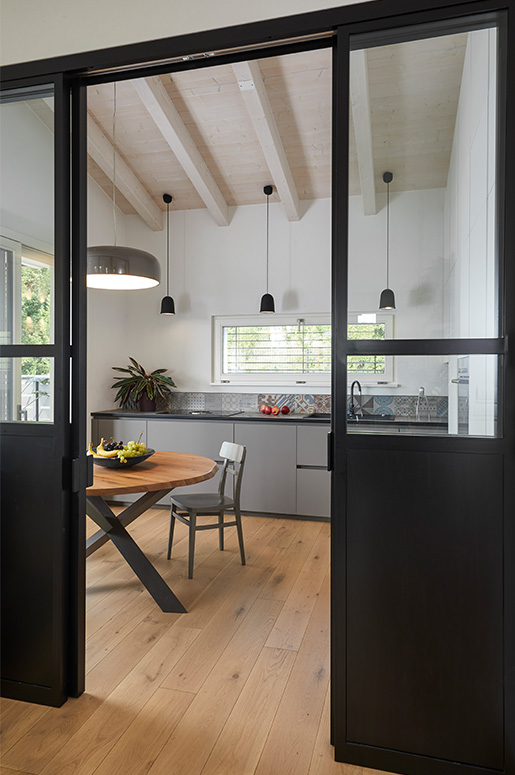 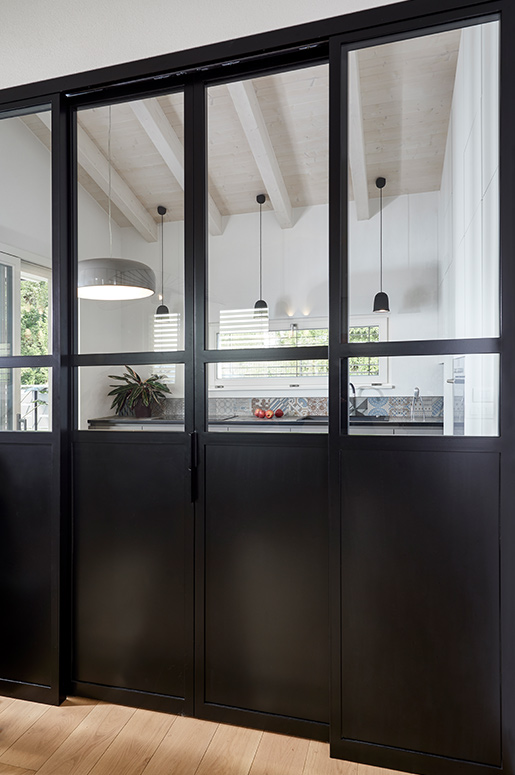 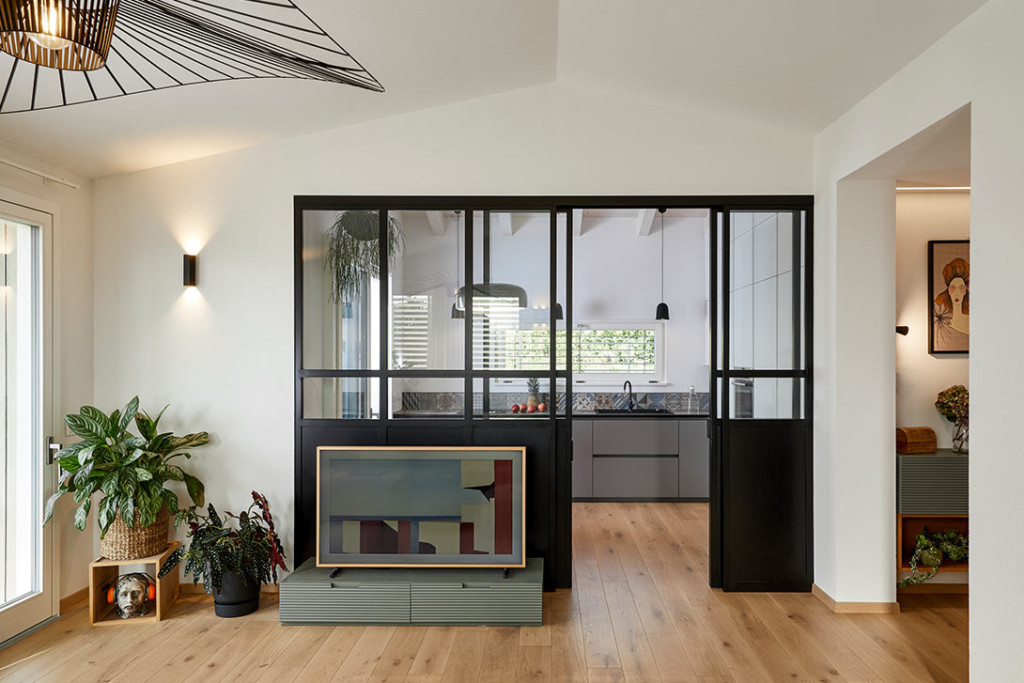 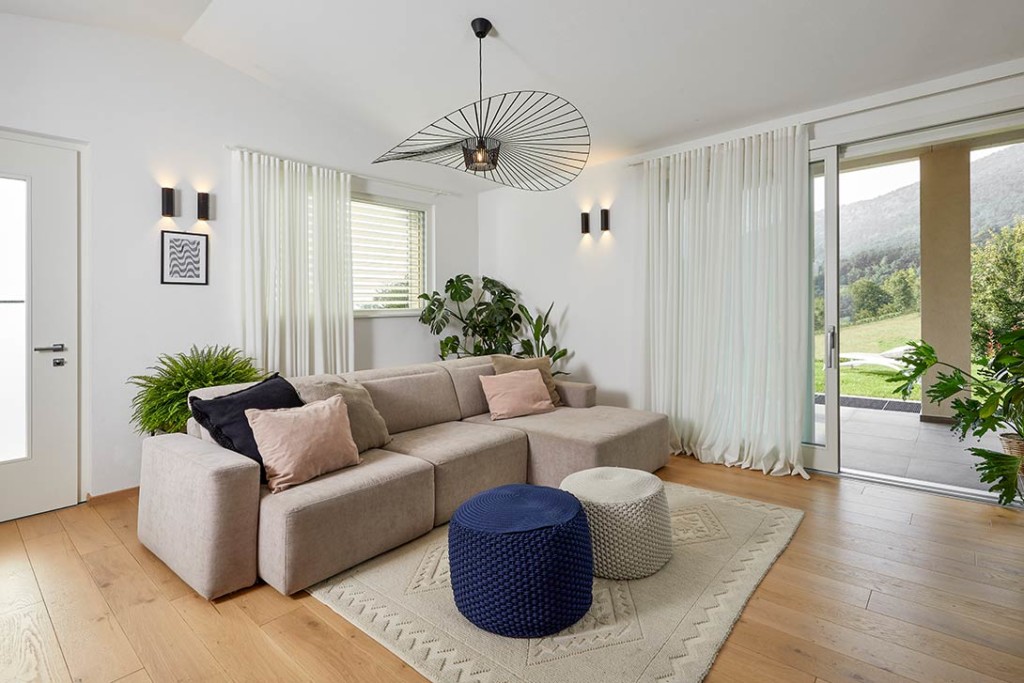 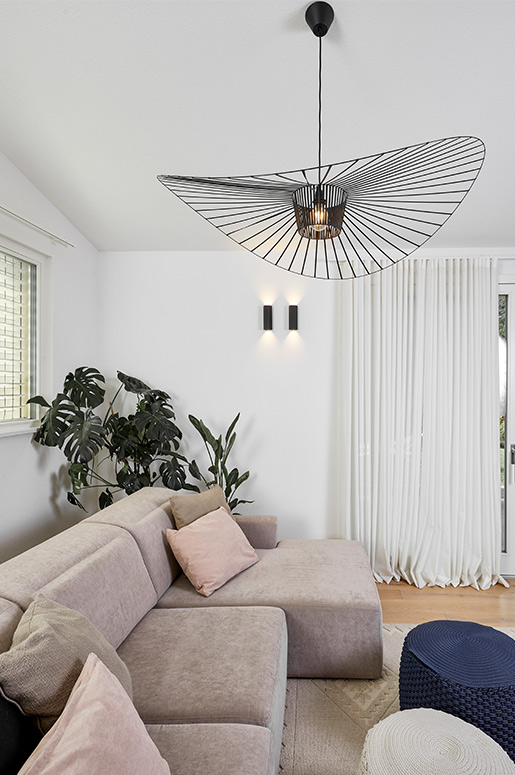 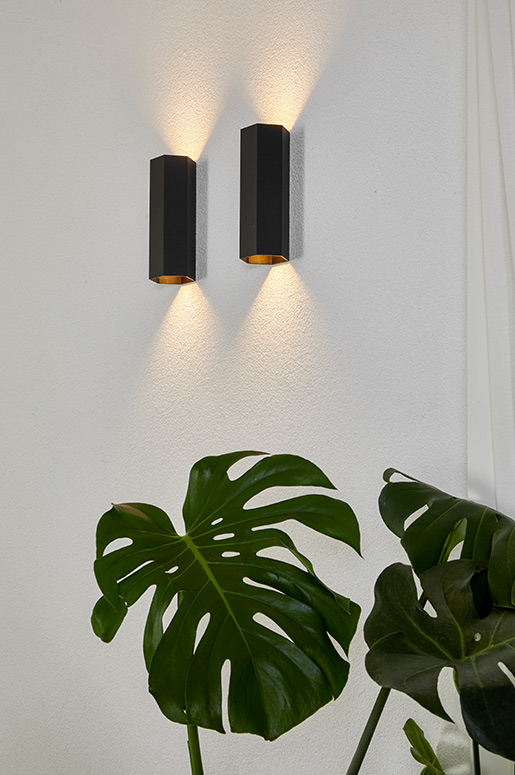 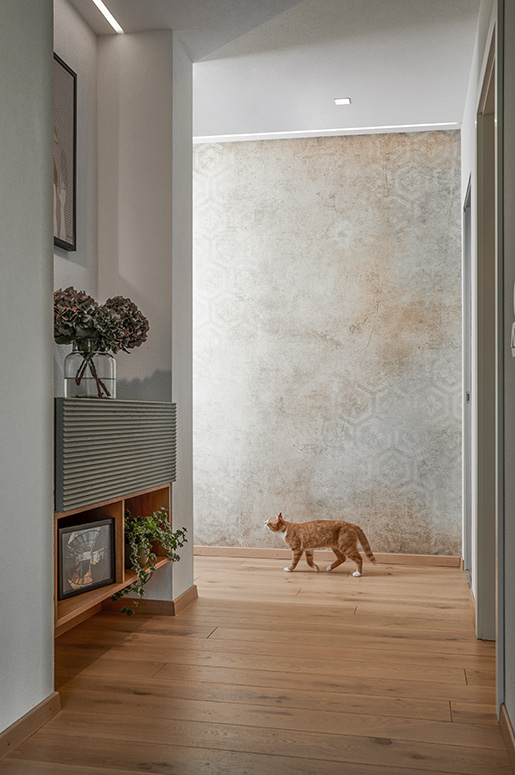 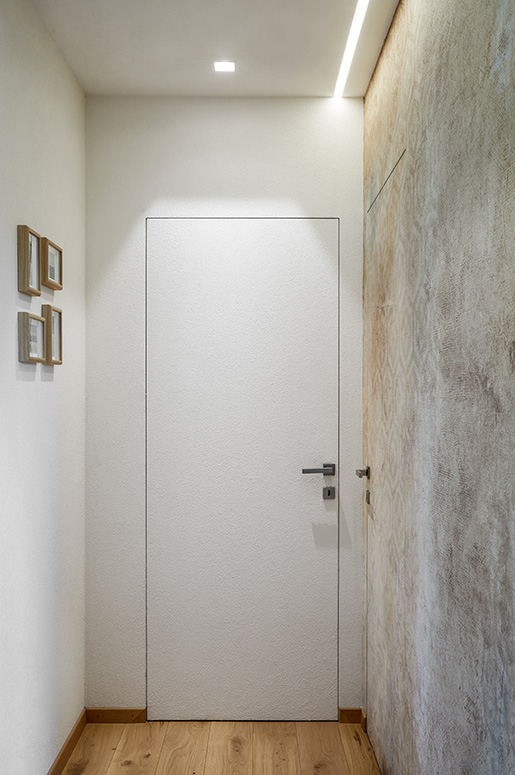 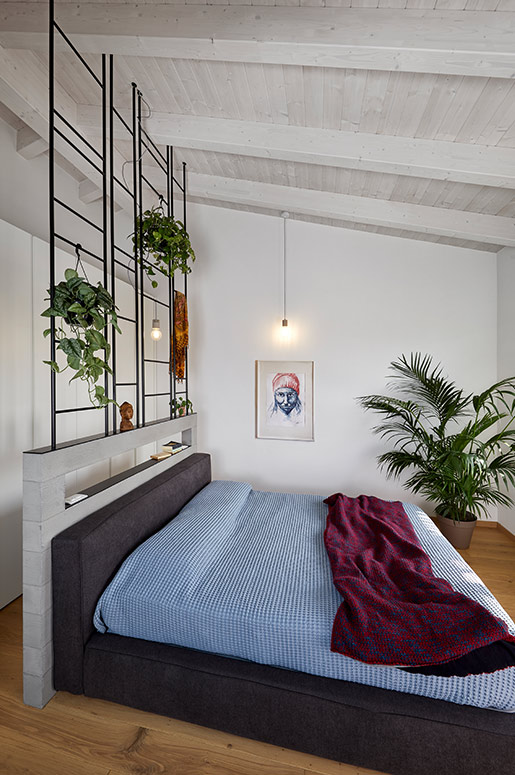 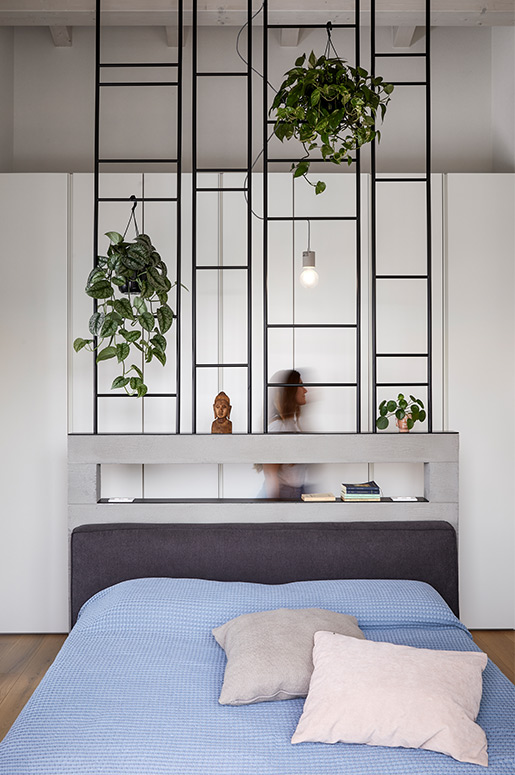 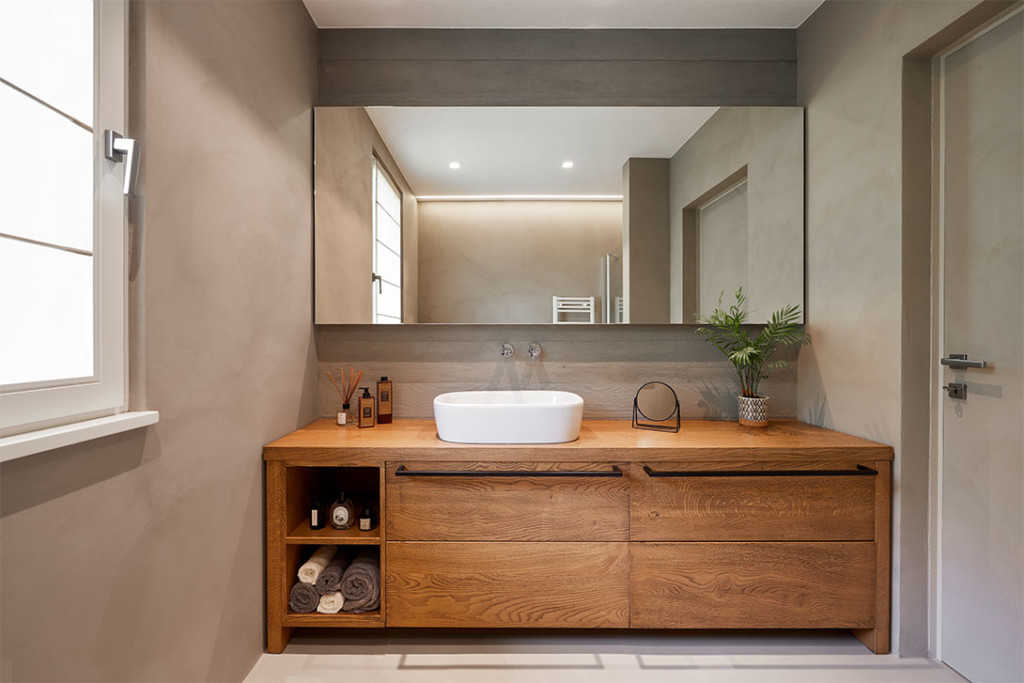 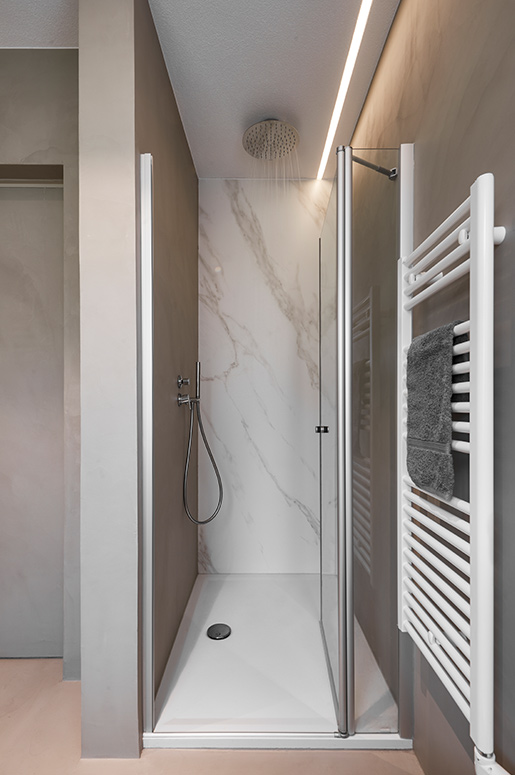 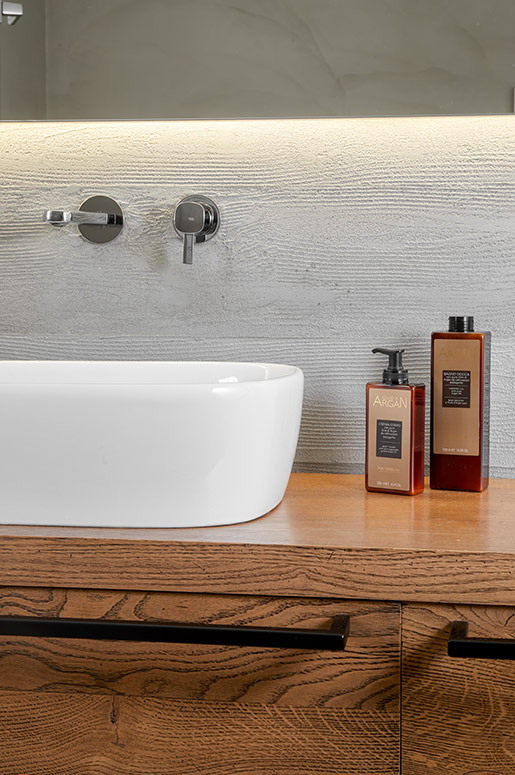 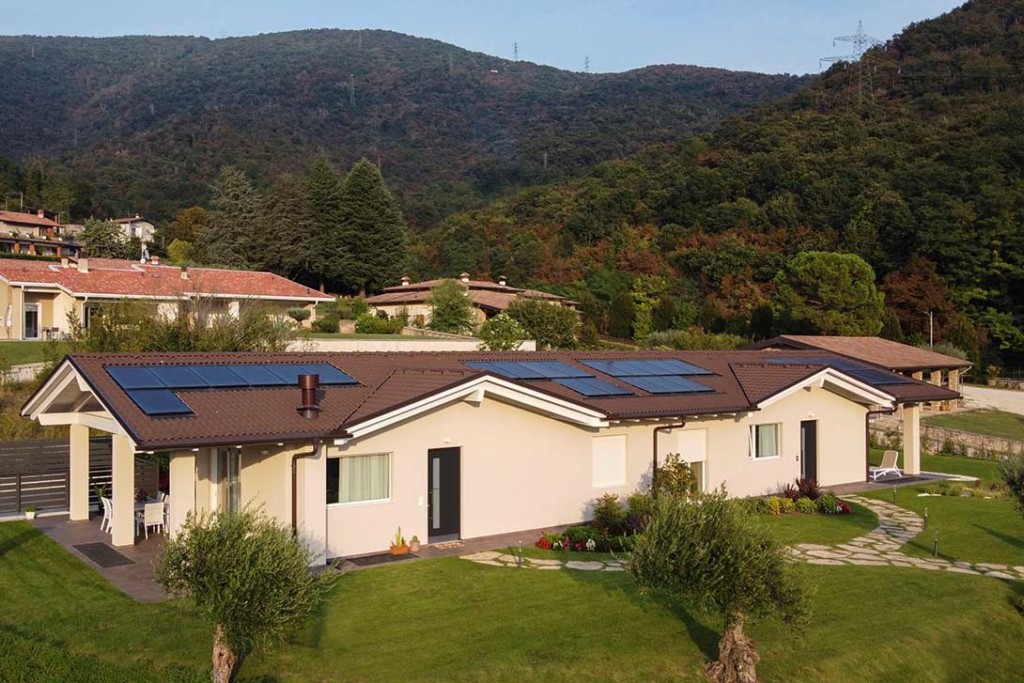 There is an obvious link between the structure and the arrangement of the elements: Wooden is an interior design project developed in tandem with the construction of a prefabricated house made of wood and located at the slopes of Brescia’s hills. The extreme architectural versatility of wood (as a material) is completed, in fact, in the realization of a project with a Nordic flavor and vision based on the client’s philosophy of “being sustainable”. Following the large entrance lawn, which frames the entire house and emphasizes the natural setting, we find the living room: here a parquet floor which covers the entire house has been laid. In this environment there is a large sofa surmounted by a lamp which is suspended, located in the center of the room which highlights a series of romantic lines that characterize the entire surrounding area. The corners are enriched by the presence of plants of various species while the lighting is made possible by some wall lamps distributed alongside the walls. Those also help by recalling the iron details present in the surrounding furnishing elements. The TV cabinet is positioned at the foot of the exclusive custom designed window frame made of black painted iron with sliding doors that allow entry to the kitchen. On the perimeter wall there is a large sliding window which leads to the veranda in the open air. This is integrated with a soft curtain which allows a good communication with the whole external environment. The changes in the direction of the ceiling, on the other hand, emphasize the division of spaces. The kitchen environment is characterized by the presence of exposed white beams and two main elements. The first is the one regarding the wall facing the entrance where the gray fenix bases are enriched by an Azulej’s Mutina ceramic top and backsplash. Lighting is made possible by three suspensions on the top. The second element is instead represented by the full-height columns on the wall facing the French door, with the presence of the oven, the refrigerator and the pantry. All in a distinctive and clean white. The round table, with the top in wood essence, is illuminated by a large suspended lamp.  A vinyl wallpaper, with a slender and light geometric pattern, identifies and embellishes the passage to the sleeping area, harmonizing perfectly with the tones of the surrounding environment and attributing a functional aspect thanks to the presence of a practical empty pocket. Thanks to this area it is possible to access the rooms, the basement and the bathroom. In the center of the room, with its custom-made headboard, it is the bed that dominates the scene of the master bedroom. In particular, we can see how the headboard was designed and built as a fifth partition of the space, so that the wardrobe is placed on the back of the visual point once one lies down. The concrete effect wall, inside which there is a void designed to allow the connection of sockets and switches and which represents a valid support element, is surmounted by full-height tubulars that go to create an original decorative design. It therefore becomes a convenient support element for clothes and accessories. This area thus obtained also allows the passage to the custom designed wardrobe, which is placed at the back of the room at the highest point in order to take advantage of its maximum capacity and capacity. The structure thus becomes a graphic element that separates and accompanies its use as a support point, valet stand and additional decoration, such as lamps and plants. The bathroom is a fascinating game of surfaces. The homogeneity of the resin, the materiality of the natural wood furniture and the marble and concrete effects dialogue perfectly in a space whose access is guaranteed by a flush door.

Wooden highlights both the natural and the Nordic elements through an atmosphere with minimal but dulles tones. A project that allows the client to follow their own eco-sustainable philosophy without renouncing an elegant style embellished with details. 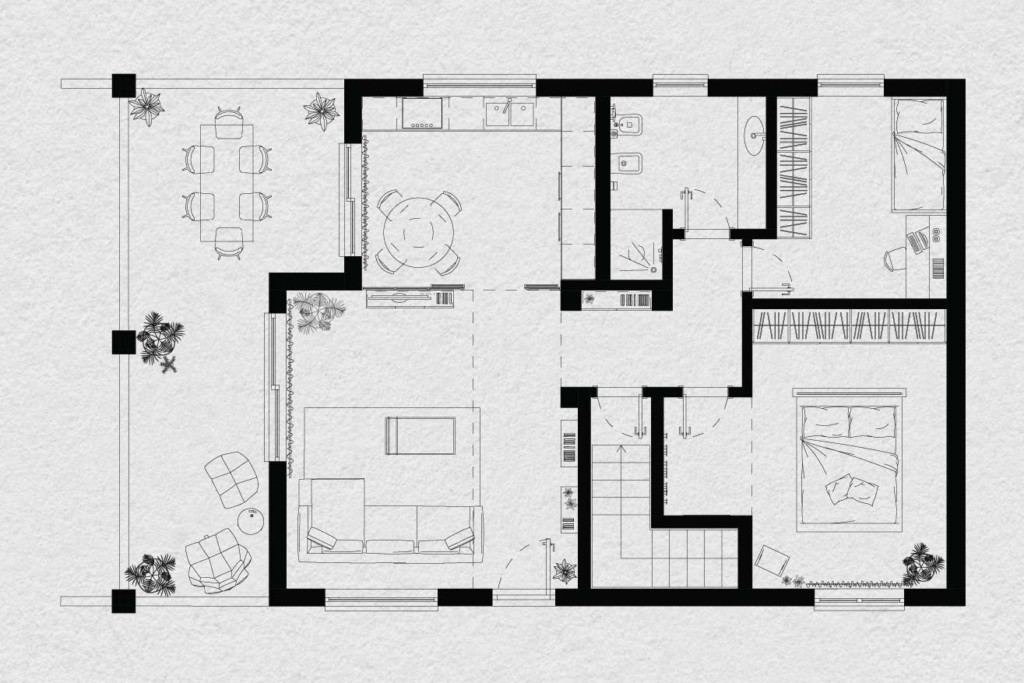 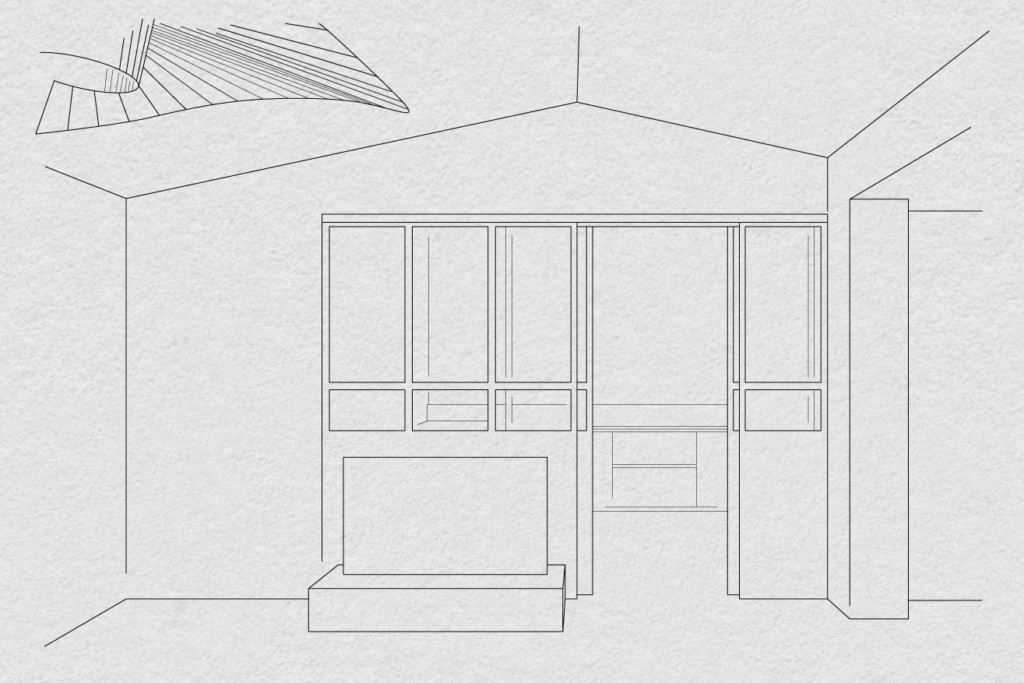 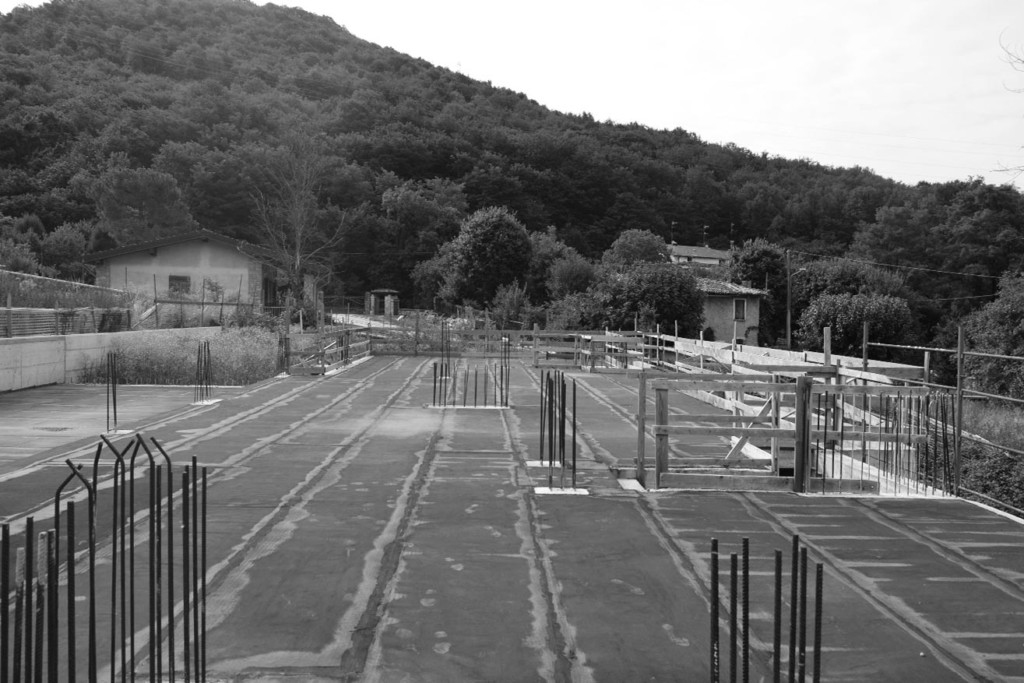 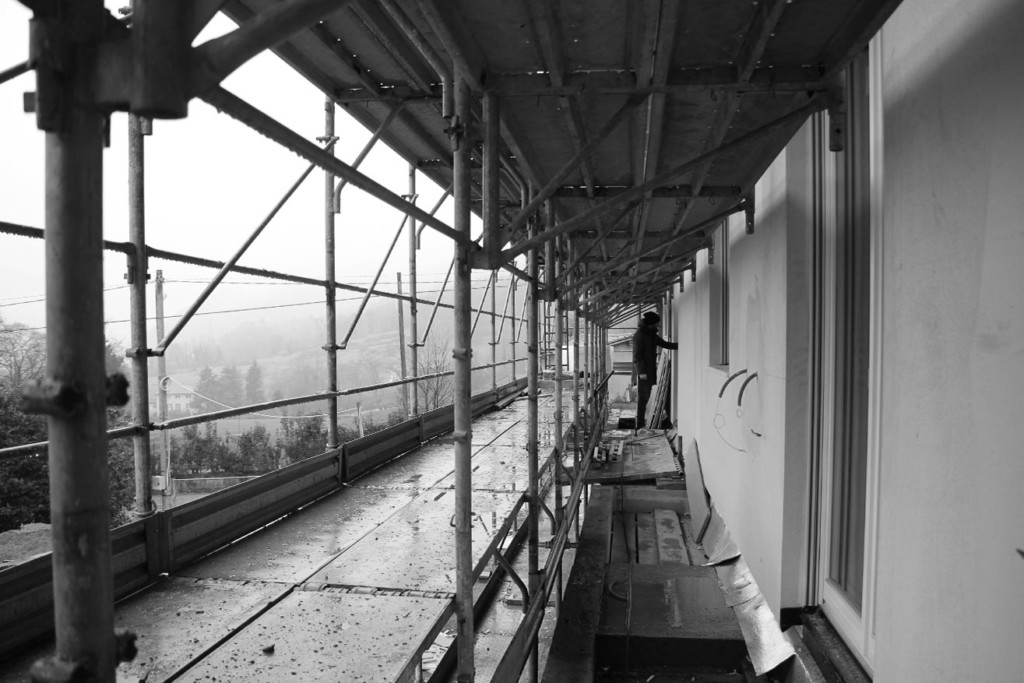 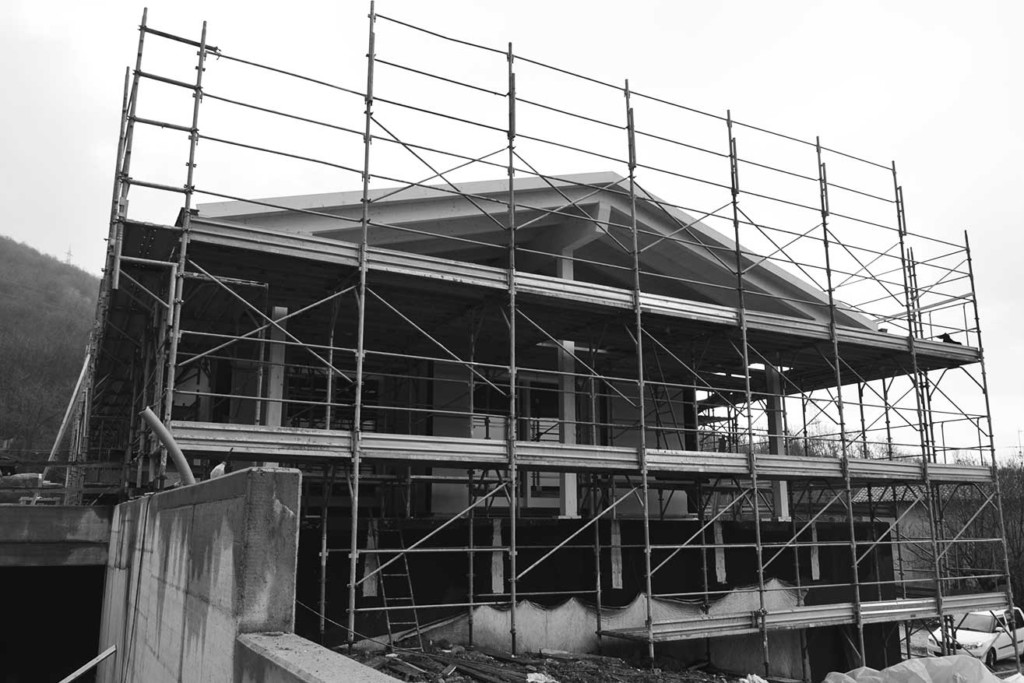 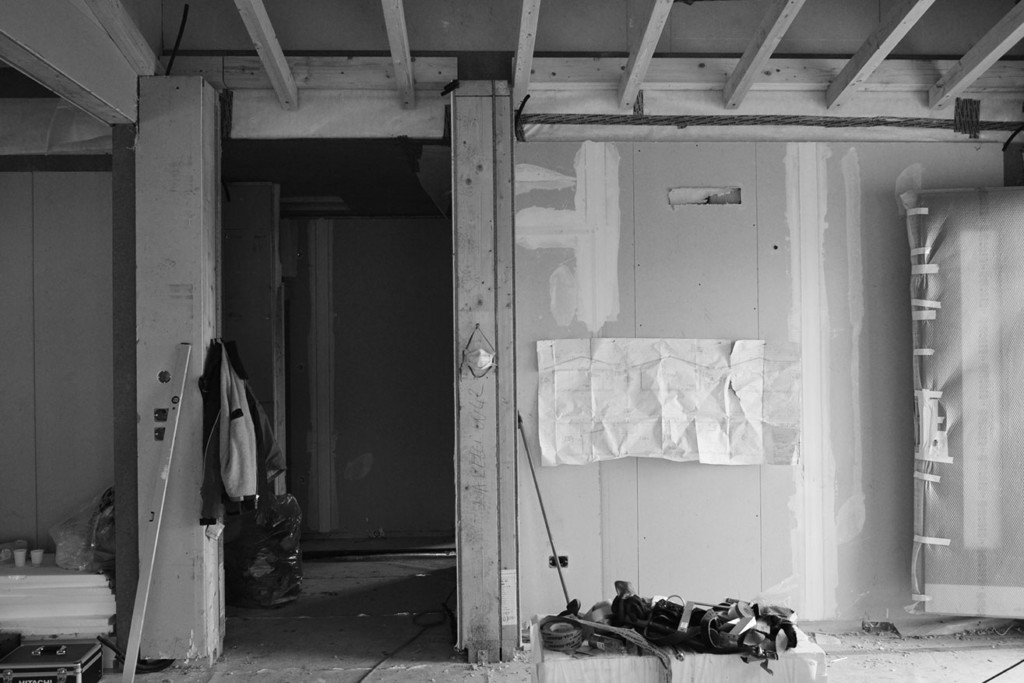 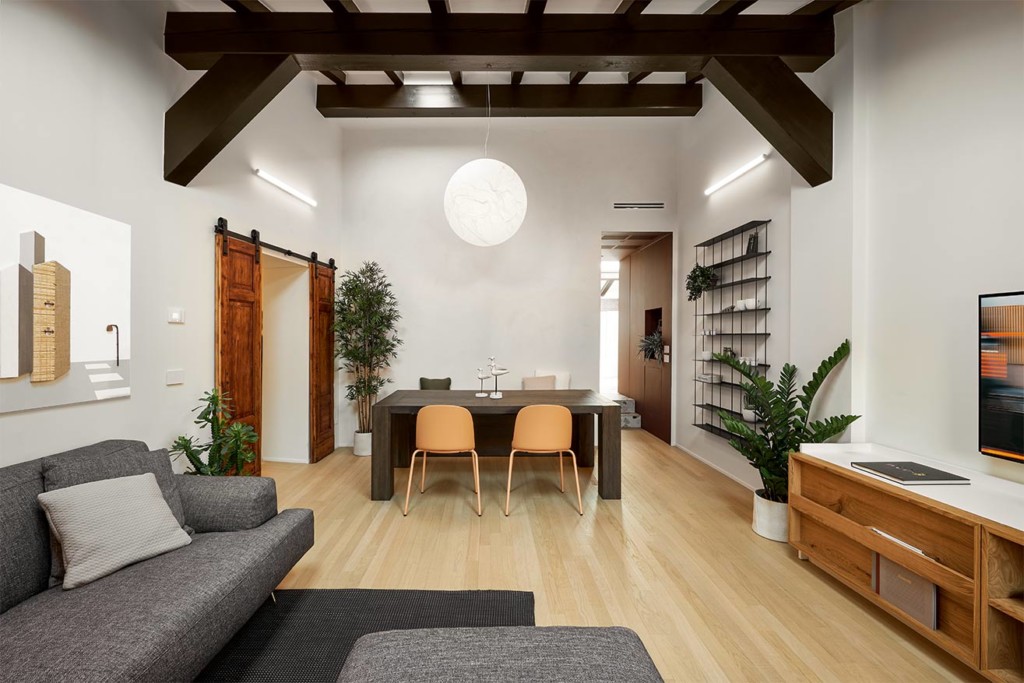 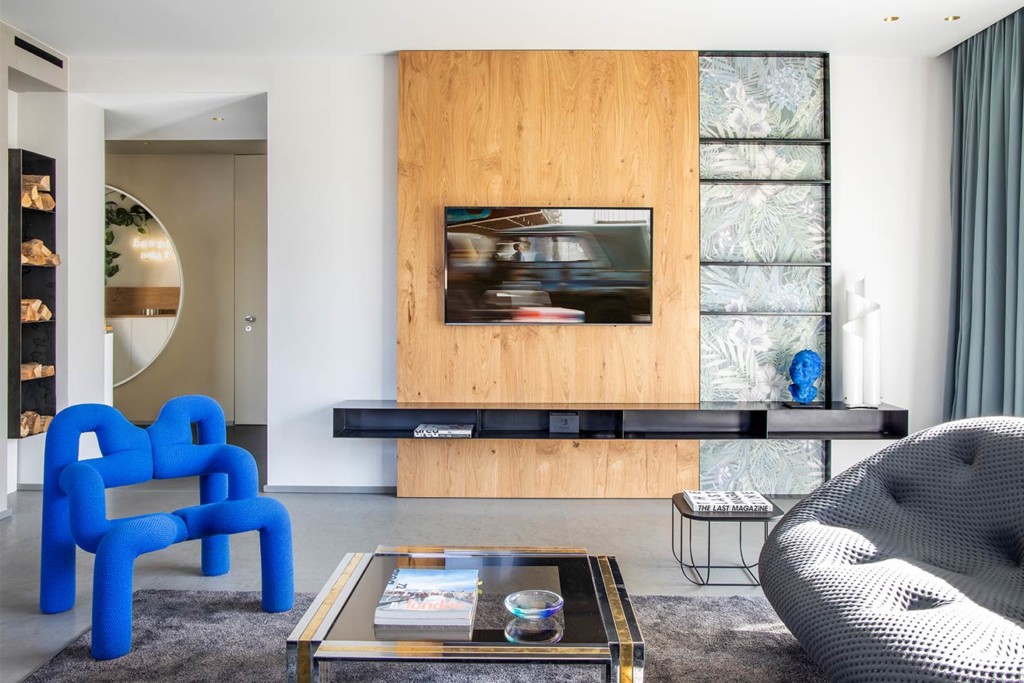